Florida Gov. Ron DeSantis, continuing his ongoing feud with most of the “corporate media,” on Thursday signed into law a contentious election bill during an event where only Fox News was allowed to observe. 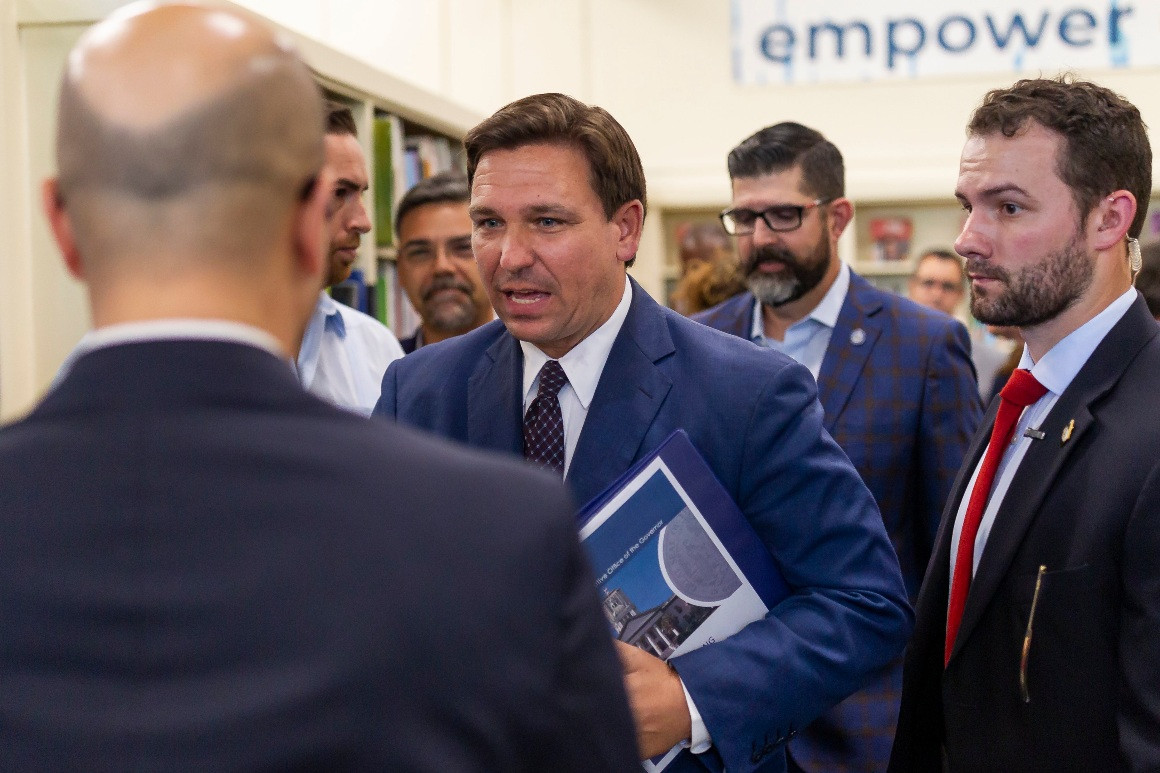 DeSantis’s decision to sign the measure, which puts in restrictions on mail-in ballot collections and the use of drop boxes, was already well-known ahead of time. Over the last several days, the Republican governor publicly touted the measure, which the GOP-controlled Florida Legislature approved by a largely party line vote last week.

Before DeSantis approved the legislation, his staff barred other reporters from attending the West Palm Beach event that also included some of the legislators who backed the bill as well as political supporters.

One reporter, Steve Bousquet with the South Florida Sun Sentinel, tweeted that DeSantis’s newly-installed communications director, Taryn Fenske, told him that the signing was a “Fox exclusive.” Other news outlets also complained about being blocked from observing the bill signing.

DeSantis — and previous governors before him — often hold closed-door bill signings, but not as an exclusive news event for one media outlet. The decision to invite only Fox News comes as DeSantis — an ally of former President Donald Trump — continues to advance a combative strategy with the media. He recently held press conferences where he lashed out at 60 Minutes over a story it did on Florida vaccine distribution, and he frequently spars with reporters at news conferences.

“This keeps us ahead of the curve,” DeSantis said after signing the bill during a seven-minute segment on Fox & Friends. He contended that signing the bill meant that “your vote will be cast with integrity and transparency.”

DeSantis also said the new law would prohibit the mass mailing of mail-in ballots even though that was already illegal before legislators took action.

DeSantis, after he signed the bill, was caught by local television reporters outside the hotel where it took place. “It was on national TV, it wasn’t secret,” he said when pressed about the decision to bar other media.

Democrats reacted sharply to both the bill signing and the governor’s decision to bar other news media from observing it.

“This is the difference between @GovRonDeSantis and me,” Rep. Charlie Crist, a Democratic candidate for governor said on Twitter. “He locks out the public and caters to FOX News. When I was Governor, everyone was invited in — Democrats, Republicans, and Independents. And when I’m Governor again, this will be a Florida for all.”

Within minutes of the bill signing, an alliance of voting rights and civil rights groups announced they had filed a lawsuit in federal court in Tallahassee to block the new law. Shortly after that, the NAACP Legal and Defense Fund filed a similar lawsuit on behalf of the Florida NAACP, Disability Rights Florida and Common Cause.

The League of Women Voters of Floridan along with Black Voters Matter Fund, Florida Alliance for Retired Americans and a handful of voters filed a lawsuit that contends the newly-enacted legislation impedes “every step of the voting process in Florida.”

“The legislation has a deliberate and disproportionate impact on elderly voters, voters with disabilities, students and communities of color,” said Patricia Brigham, president of the League of Women Voters of Florida. “It’s a despicable attempt by a one party ruled legislature to choose who can vote in our state and who cannot. It’s undemocratic, unconstitutional, and un-American.”

Florida’s elections in 2020 went relative smoothly and DeSantis himself boasted about that the state had finally “vanquished the ghost” of the 2000 presidential election recount that subjected the state to international ridicule. But then the governor in late February called for many of the changes that are outlined in the bill he signed.

One of the most significant changes in the law would place a two-ballot limit on how many mail-in ballots someone could gather and turn in on behalf of the elderly or sick and disabled voters. There is an exception for immediate family members, but some Democrats predicted this would lead to older voters being less able to participate.

The measure would impose new restrictions on when drop boxes could be used and would bar outside groups from giving out grants to help local and state election officials administer elections. This was done as a response to a Chicago-based non-profit handing out millions in aid ahead of the 2020 elections. Most of the money from that non-profit came from Facebook co-founder Mark Zuckerberg and his wife Priscilla Chan.

Despite the avalanche of criticism from Democrats and critical international coverage of Florida’s legislation as “Jim Crow 2.0,” Florida remains one of the easiest states for a registered voter in which to cast ballots. In addition to Election Day, voters have about a month to cast vote-by-mail ballots or they can cast ballots in-person for at least eight days in all counties — and for as many as 14 days in counties that elect to do so, mainly in large urban areas where Democrats congregate.

Still, the pressure for the election changes and restrictions was premised on Trump’s baseless claim that widespread and systemic voter fraud cost him his reelection. Trump carried his newly adopted home state by a bigger margin in 2020 than former President Barack Obama did in 2008.