#EndSARS: Buhari Warns Any Act of Hooliganism Will Be Dealt With

The commercial bus driver conveying us to Oshodi from Sango under bridge, turned to look at me as the lone passenger sitting with him at the front seat meant for two, but restricted to one passenger owing to the social distancing requirement, and he said, “Oga, we get gofment for dis kontry so? See how bad the road dey naw!, e don reach more than wan year wey we don dey cry about the road and notin don happen”. 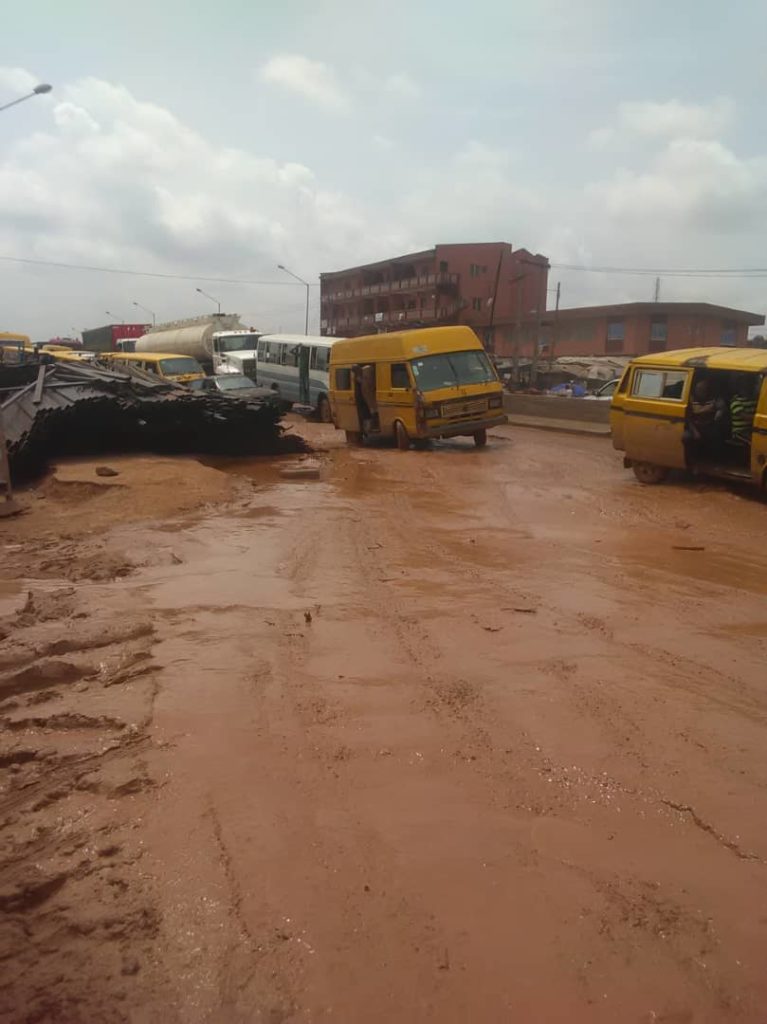 Like in a macabre dance, the driver meandered the vehicle through the very many gullies and craters dotting the Lagos – Abeokuta expressway.

Right from Temidire bus-stop a few metres away from the Sango bridge to the old toll gate in Ota, Ogun state, and from Amje bus stop through Moshalasi, Kola, Adura, Salolo, Obadeyi and U-turn bus-stops in Lagos you will find potholes that has become craters and deep gullies swallowing up vehicles, and has become truck drivers worst nightmare. 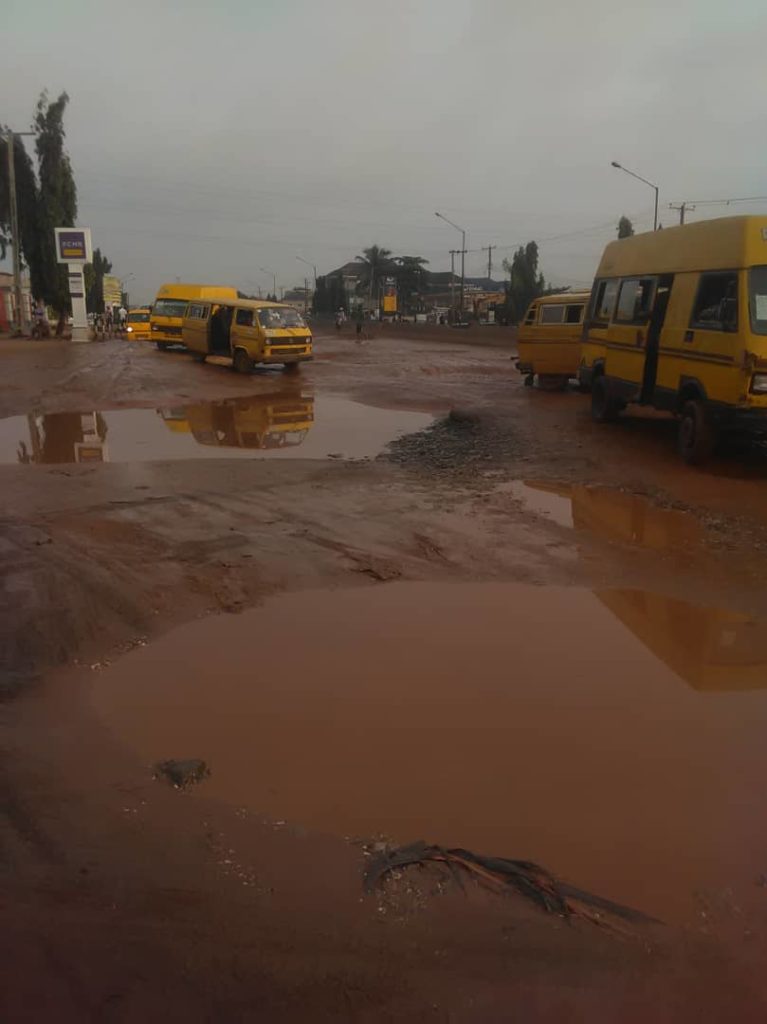 Vehicle passengers on the road endure the worst kind of giddiness they could ever bargain for, with motorists having a kind of dread for the road that is far more than the one held against bandits terrorizing travelers on Nigerian highways.

The stretch of the road between the U-turn bus-stop in Lagos state and Singer bus-stop in Ogun state is about 10 kilometers, but, it is dotted with over 168 deep potholes looking more like emerging gullies and craters panel beating vehicles into grotesque shapes when driven on it.

In a chat with me, Hon Seye Sotunde, a former council official at the Surelere local Government Area, now residing in one of the towns serviced by the road, said, it is quite frustrating that a key economic road like this can be made to deteriorate to this extent.

Sotunde further said, the chassis of his vehicle has been badly impacted by the perennial topsy-turvy daily experienced driving on the road to and fro his business place at Ikeja. 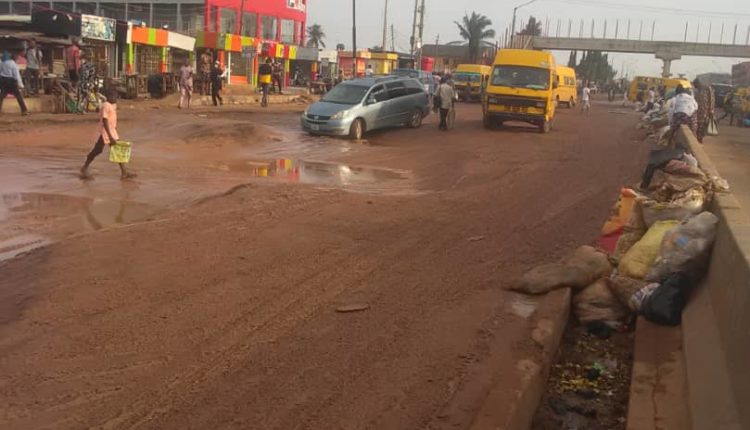 Waidi Egungboun, who simply introduced himself as a businessman, said he had been plying the road for over twenty five years, and he cannot particularly remember anytime the road is without such issues.

Alhaji Abegunde Ajayi, the CEO of Abex Logistics Nigeria Limited, with its headquarters in Sango Ota, said, “The road is nothing short than a nightmare and transporters worst enemy at the moment”.

He recalled how he lost over four million naira about two years ago when one of his trucks conveying consignments for a client fell over as it entered one of those gully-like holes around Amje Bus stop and the entire bottled drink content was mercilessly shattered and spilled all over the road.

He added that, “It is unfortunate that the state of the road had contributed in no small measure to making transport business less attractive and less profiting, stressing that the life span of the average commercial vehicle is far less than what it used to be and cost of maintenance has quadrupled”. Abegunde concluded.

It is estimated that the expressway handles more than 300,000 vehicles and more than 1million people with goods running into millions of tons daily. It is one of Nigeria’s key economic roads, strategic for providing the required connectivity between the producer and market.

Many therefore, are aghast at the non-challant attitude of the government to the condition of the road which has become a nightmare to all users.

Except for some rhetorical statement made by the Ogun state governor in the early days of his administration, when he claimed that he and his Lagos state counterpart – Babajide Sanwo Olu had gotten approval from the Federal Government to repair the highway and toll it, nothing has changed since the contractors left the work some days after the presidential elections.

Data made available from the Lagos State Traffic Management Authority, LASTMA and the Ogun state, and Traffic Compliance and Enforcement Corps, TRACE, showed a combined number of 107 crashes occurred on the Lagos-Abeokuta expressway road within the last one year, with 93% of the crashes involving trucks.

It further showed that 105 out of the 107 crashes occurred between the U-turn bus-stop in Lagos and Singer bus-stop in Ogun state, which is only about 10 kilometers of the entire 84 kilometer express road.

The situation of the road was so pathetic that, the Nigerian Bar Association (NBA) Ogun State Branch in November last year, protested in Sango-Ota against the deplorable conditions of roads in state.

In a statement, the lawyers lamented the condition of roads in the Gate way state, expressing concerns that the poor state of the roads has led to the loss of lives and caused bodily injuries on commuters.

Isaac Ogbah, , Chairman of the association, specifically cited Sango-Ota-Owode-Idiroko expressway, Atan-Agbara expressway and the Lagos-Abeokuta expressway, among others that have been causing major accidents in the state.

According to him, the bad condition of the roads has contributed to the incidents of robbery, kidnapping, sexual molestation and accidents.

Some couple of times in the past, the Lagos state government had through its Public Works Department carried out some palliative repairs of the bad portions, but as soon as the public had begun to hail the actions of the government, the repairs work suddenly disappear and the state of the patched spots got worse leading to the very many deep holes scattered all over the highway.

In a desperate move also, the Ogun state government in a bid to ameliorate the condition of the highway ahead of last year’s yuletide celebrations, put in some palliative repairs, through its public works department, with the use of broken stone elements as gravel, to fill up deep and wide potholes dotting the highway in Joju, and Singer bus-stops and nothing else have been done since then.

The general public are however concerned as to what happened to the much publicized contract for the reconstruction of the expressway, given to Julius Berger Nigeria, PLC, and was flagged off in May 14, 2018, by Mr. Babatunde Fashola, (SAN) the then Minister of Power, Works and Housing of the Federal Republic of Nigeria, to improve the state of the road and subsequently eliminate the obvious carnage and suffering of commuters.

To find out the position of the government on the obvious bad condition of the road, I spoke with, Engineer Kayode Popoola, the Director of Works, Federal Ministry of Works and Housing, Lagos state, last week and he told me he was presently in Abuja holding meetings in respect of the road, stating that. “The contractor has just been mobilized back to site to resume reconstruction works of the Lagos-Abeokuta express road.

They will be working from Owode-Ijako in Ogun into Lagos and in a few weeks time, road users will begin to see their impact on the road”.

“The contractor has just been mobilized back to site to resume reconstruction works of the Lagos-Abeokuta express road. They will be working from Owode-Ijako in Ogun into Lagos and in a few weeks time, road users will begin to see their impact on the road”.